Discuss books with fellow lit lovers in the community! We meet the second Thursday of every month at 1:30pm at the Argenta Library. The library can place a hold on the monthly selections for you if you wish. We also try to keep a few spare copies at each circulation desk.

Check out our top-rated books!

We’re always open to new members – join at any time! If you can’t make it in person to the book club discussion, click here to rate this month’s book! 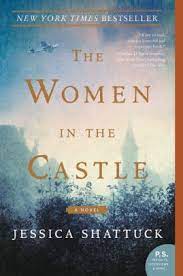 The Women In The Castle
by Jessica Shattuck

Amid the ashes of Nazi Germany’s defeat, Marianne von Lingenfels returns to the once-grand castle of her husband’s ancestors, an imposing stone fortress now fallen into ruin following years of war. The widow of a resister murdered in the failed July 20, 1944, plot to assassinate Adolf Hitler, Marianne plans to uphold the promise she made to her husband’s brave conspirators: to find and protect their wives, her fellow resistance widows. First Marianne rescues six-year-old Martin, the son of her dearest childhood friend, from a Nazi reeducation home. Together, they make their way across the smoldering wreckage of their homeland to Berlin, where Martin’s mother, the beautiful and naive Benita, has fallen into the hands of occupying Red Army soldiers. Then she locates Ania, another resister’s wife, and her two boys, now refugees languishing in one of the many camps that house the millions displaced by the war. As Marianne assembles this makeshift family from the ruins of her husband’s resistance movement, she is certain their shared pain and circumstances will hold them together. But she quickly discovers that the black-and-white, highly principled world of her privileged past has become infinitely more complicated, filled with secrets and dark passions that threaten to tear them apart. Eventually, all three women must come to terms with the choices that have defined their lives before, during, and after the war–each with their own unique share of challenges. 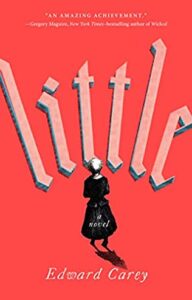 Little
by Edward Carey
Discussion Thursday, November 10, 2022 at 1:30 pm
In 1761, a tiny, odd-looking girl named Marie is born in a village in Switzerland. After the death of her parents, she is apprenticed to an eccentric wax sculptor and whisked off to the seamy streets of Paris, where they meet a domineering widow and her quiet, pale son. Together, they convert an abandoned monkey house into an exhibition hall for wax heads, and the spectacle becomes a sensation.

As word of her artistic talent spreads, Marie is called to Versailles, where she tutors a princess and saves Marie Antoinette in childbirth. But outside the palace walls, Paris is roiling: The revolutionary mob is demanding heads, and…at the wax museum, heads are what they do.

In the tradition of Gregory Maguire’s Wicked and Erin Morgenstern’s The Night Circus, Edward Carey’s Little is a darkly endearing cavalcade of a novel – a story of art, class, determination, and how we hold on to what we love. 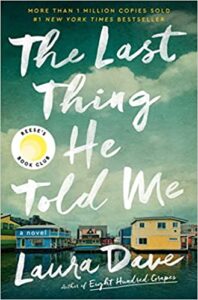 The Last Thing He Told Me
by Laura Dave

Before Owen Michaels disappears, he smuggles a note to his beloved wife of one year: Protect her. Despite her confusion and fear, Hannah Hall knows exactly to whom the note refers—Owen’s sixteen-year-old daughter, Bailey. Bailey, who lost her mother tragically as a child. Bailey, who wants absolutely nothing to do with her new stepmother.

As Hannah’s increasingly desperate calls to Owen go unanswered, as the FBI arrests Owen’s boss, as a US marshal and federal agents arrive at her Sausalito home unannounced, Hannah quickly realizes her husband isn’t who he said he was. And that Bailey just may hold the key to figuring out Owen’s true identity—and why he really disappeared.

Hannah and Bailey set out to discover the truth. But as they start putting together the pieces of Owen’s past, they soon realize they’re also building a new future—one neither of them could have anticipated.

Interested in participating? Let us know!
We’ll keep you informed of future discussions and even place a hold on the book for you.
Each month the Book Discussion Group rates the book that we have read on a scale from 1-5.