DAUGHTER OF THE MOON GODDESS by SUE LYNN TAN 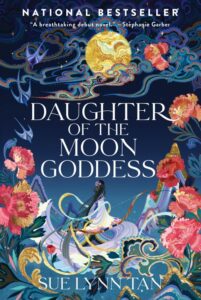 populated with backstabbing immortals and magical powers. Xingyin becomes the companion of the Prince of the Celestial Kingdom, Liwei, and eventually an archer in the Celestial Military, where she meets young Captain Wenzhi. All of this is in service of Xingyin’s goal: To free her mother from imprisonment on the moon.

Daughter of the Moon Goddess is a lush, poetic read from the first page. Tan’s writing is lyrical and lovely, and at first the book reads like a fairy tale ripped straight from fantasy China. This fairy tale turns quickly into a xianxia drama once Xingyin makes it to the Celestial Kingdom. Which is not a bad thing, since I love xianxia dramas, but it was a little jarring to read how one event jumped into another so quickly. (As a side note, here’s a good explanation of what xianxia is). Time also flows differently in the Celestial Kingdom, since everyone is immortal, including Xingyin herself (though her father was mortal). Entire years go by in a couple of sentences–and while I was fine with it because I’m used to the conventions of the genre–I can see how other readers might get confused or frustrated given the lack of explanation for certain events.

Much like a xianxia drama itself, Daughter of the Moon Goddess is a long book. 500+ pages long. You go through a real journey with Xingyin, and while the book struggles with pacing in the middle, it picks up near the end. While I found a few of the characters a little flat–especially Liwei, who never quite moves from his Kindly Prince role–I still enjoyed reading about them, especially in regards to the romantic angst of the love triangle. Yes, there’s a love triangle in this, but I didn’t mind it. It actually made a lot of sense and added some dimension to the story. Wenzhi, the other half of the triangle, is a compelling character and I hope we get to read more about him in the second book.

All in all, Daughter of the Moon Goddess is a gorgeous book inside and out. Those looking for a sweeping fantasy that spans years and romances should definitely pick this one up at the Argenta Library today!