Home Review In Case You Missed It – Horimiya 1 by HERO

In Case You Missed It – Horimiya 1 by HERO

It’s that time again, dear readers. The time I read some manga and review it for our lovely website. This week, I wanted to review one of manga’s breakout hits, Horimiya. The anime adaptation of the manga is hugely successful, and while I have yet to watch it, I can see why the story would be so popular with anime audiences. Horimiya is pretty straightforward: Hori is a girl, going to high school and taking care of her younger brother. She is pretty and popular and rarely let 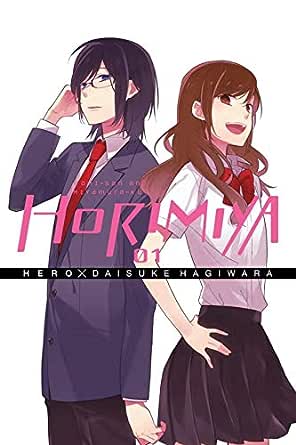 s anyone see the more maternal side of her. Miyamura (hence the title, get it? Hori? Miya? Okay, moving on), on the other hand, is a boy in Hori’s class known for being weird and kind of “gloomy.” However, when a chance encounter brings Hori and Miyamura together, they both realize they’re hiding sides of themselves from the world–sides they can only share with one another.

I don’t have much to say about the first volume of Horimiya other than that I enjoyed it. Perhaps I’m getting a little old for straight-up shojo titles about high school romance, but nevertheless, I found this volume to be pretty cute. Miyamura is a standout for me. He’s got long hair and tattoos and piercings and he doesn’t want anyone to know about them–they’re still quite taboo for teens in Japan, after all. He’s also very kind and always helps Hori with her younger brother. Hori is a fun protagonist as well, and she doesn’t quite fit into the typical shojo mold of the shy, soft girl too innocent to be real. Hori is brash when she wants to be, and frankly? Kind of mean sometimes. I appreciated that about her, having read more than a few shojo titles in my day. I also really loved the art style of this title. It’s got a very…evolved look that’s distinctly different from the early 2000s shojo manga I’m used to.

If I had one gripe about Horimiya, however, is that it seems to be a bit regressive when it comes to gender and sexuality. The manga was first published in Japan in 2012 and translated into English in 2015, so it’s not like the series is ancient. There are some comments about how Miyamura could never be into a guy (not said by him, by the way, but by Hori) and that he couldn’t possibly want a boyfriend because he’s a boy himself. As a long time consumer of Japanese pop culture, this kind of gay panic doesn’t really surprise me. If you do want to check out a manga series centering a gay boy that isn’t overly sexualized like a lot of yaoi is, try Our Dreams at Dusk: Shimanami Tasogare by Yuhki Tamakani (which we have at the Argenta Library!).

All in all Horimiya is a worthy read for a cute high school romance. You can check out the first two volumes at the Argenta Library today!