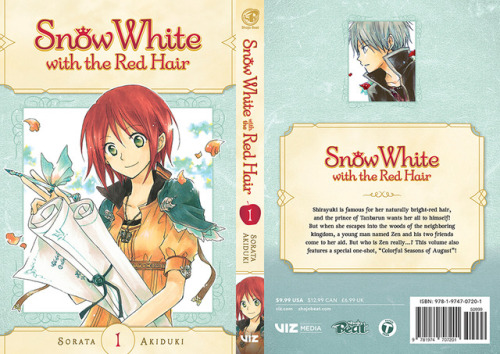 SNOW WHITE WITH THE RED HAIR 1 by SORATA AKIDUKI

It’s been a while since I reviewed a manga, so I figured, this week, I’d give it a go. The manga this time around is Snow White with the Red Hair volume 1 by Sorata Akiduki. The Snow White in question here is Shirayuki, a girl famous for her bright red hair. Shirayuki wants to be a famous for more than her hair, however, and is studying to be an herbalist when her striking appearance catches the eye of the arrogant Prince Raj. Faced with becoming his concubine, Shirayuki flees her home kingdom and meets a young man named Zen. Zen just so happens to be the second prince of her home country’s rival kingdom, and the manga kicks off from there.

Snow White with the Red Hair, which I will call Snow White through the rest of this review, is not the most difficult manga to wrap your head around. In fact, it’s quite tame. The European setting mixes well with the fairy-tale vibes teh manga gives off, and nothing too “racy” happens within its pages. Snow White is sweet and light, with the conflicts being relatively low-stakes and easily resolved within a chapter. Oh no, Shirayuki is being kidnapped. It’s fine, because you know the danger won’t go too far. Usually I’m not one to enjoy these purely slice-of-life stories, simply because I find them a little boring, but Snow White succeeds in charming its readers with its softness. You just know, when you’re reading it, that nothing terrible is going to happen to Shirayuki or her friends.

Arguably the main focus of this manga is Shirayuki’s budding love story with Prince Zen. Again, it’s very tame, and the most these characters ever do is hold hands. I found their relationship to be sweet and well-suited to younger teens. All in all, there’s not much to say about Snow White with the Red Hair. It’s a fun, quiet manga to read when you don’t want to be stressed out by giant robots or death notes. It’s also a great place to start if you’re looking to jump into the wide world of manga for the first time. You can pick up our copy at the Argenta Library today!