In Case You MIssed It – The Betrothed by Kiera Cass

THE BETROTHED by KIERA CASS

I’m going to be honest with you, dear readers. I’ve kind of lost my steam here at the end of the year. According to GoodReads, I’ve read exactly 100 books this year and that’s probably what’s contributing to my burnout. Nevertheless, I have a review for you all today and, well, let’s just say it’s going to be an interesting one. You may remember that I reviewed The Selection by Kiera Cass at some point in reviewing career. That book is not good by any stretch of the imagination, but I love it anyway because it’s so bad it’s good. The Betrothed, on the other hand…

Let’s just say it skips over the “good” parts. Unfortunately.

The Betrothed follows a young woman named Hollis Brite as she becomes young King Jameson’s favorite lady at court. They bond so much that King Jameson is ready to make Hollis his queen. This would be great and all if it weren’t for Silas Eastoffe, a handsome refugee boy from the rival kingdom of Isolte. As you can imagine, sparks fly and a love triangle is formed. As for what happens after said love triangle, well, I have no idea. 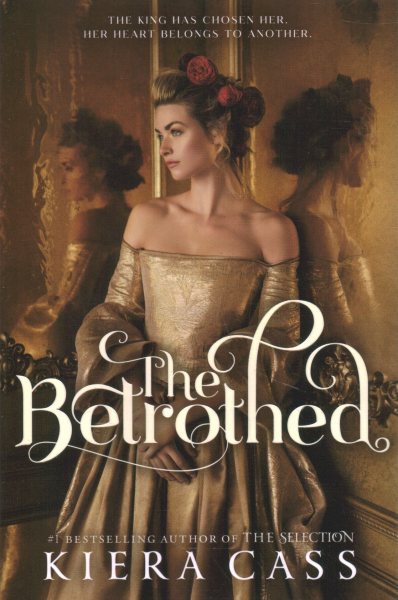 Nor do I care because, unlike The Selection, The Betrothed is painfully, painfully boring. Hollis is boring. King Jameson is boring. Silas is boring. I didn’t feel chemistry between any of these characters and I didn’t understand for a second why King Jameson fell in love with Holls in the first place. This, in stark contrast with how wildly entertaining The Selection is. Whereas America is whiny and annoying, Hollis doesn’t even have the personality to be whiny and annoying. She just…exists on the page. She says words and does some things, but the blandness with which I write this sentence is exactly how bland she is in the book.

As for the love triangle, I must confess that I actually love a good love triangle when it’s done well. It was not done well in The Betrothed. It becomes painfully obvious the second Silas appears on the page that he is going to  be the second leg of Holli’s love triangle. These two are instantly attracted to each other–which is fine, they’re teenagers–but aside from being told that they’re attracted to one another, we aren’t really shown it, and that’s the entire crux of the problem with this novel. We’re told so many things. We’re told how enchanting Hollis is, how beautiful and kind. Are we shown it? No. Not much happens in this book beyond some vague court intrigue and some passionless romance, which is so disappointing. The Selection is silly, but it’s my kind of silly. The Betrothed is just boring. Which is so much worse.