YOU SHOULD SEE ME IN A CROWN by LEAH JOHNSON

You Should See Me in a Crown by Leah Johnson is one of those books I’ve been meaning to pick up for a very long time now–I just never did. Until, one day, I was surfing our shelves for something to read for this review. I saw Crown on the shelf and I was like, huh, I really need to read that, don’t I? I’m so glad I did, because let me tell you something, dear readers: this book is adorable.

In Campbell County, Indiana, prom is kind of a big deal. The entire high school gets in on the action and there’s even an app called Campbell Confidential that details all the dramatic goings-on of the school’s prom race. Winning prom king or prom queen isn’t just about winning the title. It’s about winning a massive scholarship to the college of your choice. After finding out she’s not getting as much financial aid to the prestigious private college she wants to attend 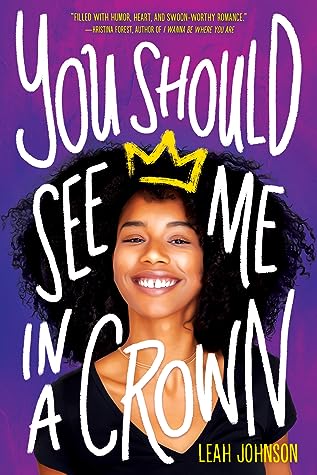 , Liz Lighty decides to run for prom queen in the hopes of winning the scholarship. What follows is a delightful and charming race for the crown.

Now, I’ve seen some reviewers call Crown “corny” and “cliche.” In a way, I can understand those criticisms, but I also don’t care. This book was so fun and light that nothing could ruin my enjoyment of it. Liz , a tall Black girl who is also gay, is focused and driven, but she also has a core group of friends who will stop at nothing to win her the title of prom queen and all the amenities that come with it. Liz’s narration is funny and the writing overall was very good. Liz’s relationships with her family were also fun to read about, as well as her friendship with a boy named Jordan. It’s so rare to see male-female friendships in YA, friendships that don’t evolve into romance, so it was nice to see.

Liz does have a romance with another girl named Mack, which I found equally as adorable as everything else. Despite all the cuteness, there’s some raw conversations in this book about racism and homophobia in small towns, which I really enjoyed. YA doesn’t stray into small towns very often, so Crown really connected with me on that level too.

All in all, this book was so much fun and I had a fantastic time reading it. There are a few things I could nitpick at–what was going on with Jordan’s girlfriend, for example–but none of that got in the way of my enjoyment of the story. Everyone–no matter their race, sexuality, gender, ability–deserves a story like this. A true rom-com with a joyously happy ending.

You can pick up a copy of You Should See Me in a Crown at the Argenta library today!