Briarcliff Prep by Brianna Peppins is a surprising novel. Our main character, Avielle LeBeau, is fourteen years old and in her first year of school at an HBBS, a historically Black boarding school–Briarcliff Prep. Avi has a loving family and a number of siblings, including Belle, her oldest sister and a senior at Briarcliff. While the novel starts as something of a boarding school romance between Avi and her math tutor, it quickly takes a turn into a book about domestic violence.

I really enjoyed this book and found Avi to be a compelling character. I was a little worried, thinking I wouldn’t be able to connect with a book with such a young protagonist, but I’m happy to say I was wrong. Avi’s a level-headed young woman, smart and ambitious, and sh 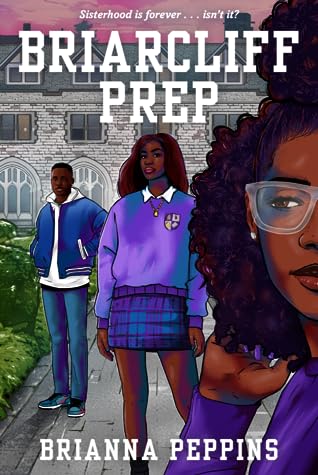 e does whatever it takes to protect her family. Belle, Avi’s oldest sister, is another compelling character. She isn’t the stereotypical portrait of a “domestic violence victim,” rather she’s nuanced to the point where she feels like a real person instead of a caricature. Avi and Belle have a number of side characters around them, including Avi’s roommates, Zazie and Rhyon, and Belle’s best friend Neveah. While I liked all these secondary characters, there are one too many and instead of making the story feel fleshed out, I found myself a little confused about which character is which.

Friendship is an important aspect of this book, certainly, but another important aspect is family. Avi and Belle’s parents are very present throughout the story and play an active role in their lives. I appreciated this, because as an avid YA reader, I rarely see parents playing such crucial roles in books. Avi’s relationship with her math tutor turned boyfriend, Quincy, is also very cute, but it got brushed aside for Belle’s struggle against domestic violence–which is understandable, of course, but I do wish the romance was expanded upon a little more.

Briarcliff Prep also takes the time to discuss the nuances of Black womanhood in America, and Peppins even includes an author’s note at the end of the book explaining what HBBS are and how they relate to HBCUs, historically Black Colleges and Universities. HBBSs are very real and they existed out of necessity in the late 1800s onward. Only a handful still exist today. I had no idea about any of this, so I really appreciated Peppins educating readers on the topic.

Overall, Briarcliff Prep is a rare family-oriented YA read that would be great to pick up during Black History Month–or any month for that matter.