HELL FOLLOWED WITH US by ANDREW JOSEPH WHITE

Readers, I’ve done it. I’ve found my favorite book of the year, and it’s Hell Followed With Us by Andrew Joseph White. A brutal, gory gem of a book, HFWU is what happens when eco-fascists get combined with far-right evangelicalism. Throw in some body horror and trans-masculine rep and you’ve got yourself one hell (pun intended) of a story. HFWU follows sixteen year old Benji, a trans boy on the run from the extremist cult who raised him. After the horrific murder of his father, Benji is taken in by a group of teenagers who have managed to survive the apocalypse by taking shelter in what was once the Acheson LGBTQ+ Center in Pennsylvania. 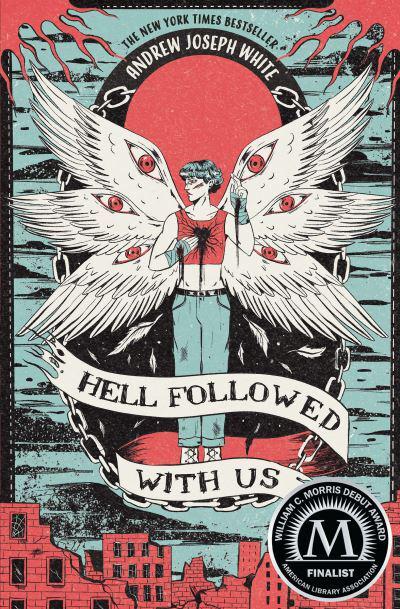 disease called the Flood, and it is run by a group of terrorists who believe that the only way to save the world is to cleanse it, aka commit genocide. Non-believers, those who don’t adhere to the cult’s extremist views on religion, are promptly killed, while the stragglers are left to a militia group called The Angels. Benji, infected with a special strain of Flood that will turn him into a monster called Seraph, is expected to bring about a new world order. Until he decides he doesn’t want to be the cult’s destructive savior. However, the Flood and Seraph are killing him one day at a time, and it’s up to Benji and his new friends to figure out how to survive in a world that wants them dead.

I LOVED this book. Loved it. It’s so different than anything else on the YA market today, from the post-apocalyptic concept to the trans main character and wonderful autism rep. HFWU can be a difficult book to read at times. It’s bleak, and Benji’s journey is an often painful one to read about. White excels at the gory descriptions found within these pages, and the action sequences are all extremely well-written. I really came to care about Benji as a character, as well as Nick (Benji’s love interest and leader of the survivors at Acheson). The side characters are also well developed and I adored their complicated relationships with one another.

As I said before, HWFU is a gory gem of a book. And I do mean gory. There are a lot of graphic descriptions of what’s happening to Benji’s body as the Flood continues to affect him. There’s a lot of vomit, a lot of rot, a lot of bodily fluids. Be forewarned if you’re sensitive to that kind of stuff. There’s also transphobia, religious abuse, and graphic violence. None of these things feel superfluous to the narrative, however. All of Benji’s trials and tribulations have a purpose.

Hell Followed With Us is a powerful book on a lot of levels. I loved every word of it and I can’t wait to see what Andrew Joseph White does next.