I Kissed Shara Wheeler by Casey McQuiston is McQuiston’s debut into the world of YA. Their previous works, Red, White, and Royal Blue and One Last Stop are both adult rom-coms and resounding successes. RW&RB is even being adapted by Amazon. I read RW&RB when it first released due to the incredible amount of hype surrounding it. I liked that book, but I didn’t love it like I wanted to. I didn’t read One Last Stop, but I did decide to pick up Shara Wheeler. I’m usually not a rom-com person (in books, anyway), so I’m not sure why I picked this up. To see what McQuiston would do with YA, perhaps?

My personal journey with this author aside, Shara Wheeler is pitched as Gone Girl meets YA rom com. Seriously. Our main characters are Chloe, Rory, and Smith, and while the 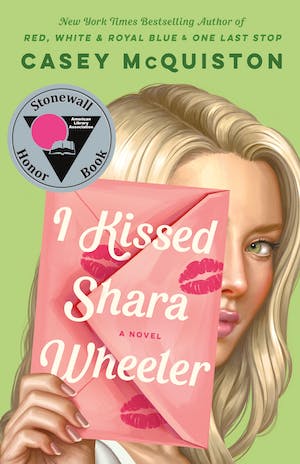 y all occupy different social circles in their private Christian school in Alabama, they have one thing in common: they all kissed Shara Wheeler. Or rather, Shara kissed them. Shara is the blonde haired, green eyed, perfectly angelic star of their school and daughter of the principal. Shara goes missing shortly after kissing Chloe at prom, leaving behind pink notecards that lead Shara, Smith, and Rory on a hunt for clues as to where she could possibly be. They all want Shara back for separate reasons. Chloe wants her academic rival back. Smith wants his girlfriend back. Rory wants his unrequited love back. And so the book jumps off from there.

I was wondering how McQuiston’s snappy writing style and distinctive voice would translate to YA. If you’ve read a McQuiston book before, you’ll know what I mean. Lots of jokes, witty one-liners, and pop culture references. I don’t dislike this in a writer and I didn’t necessarily dislike it here, but this style isn’t exactly my cup of tea, so I didn’t enjoy it as much as other readers might. I also have some issue with the plot. Over half of this book is dedicated to the search for Shara. Chloe becomes obsessed with finding her and comes to the conclusion that Shara is in love with her. Once Shara eventually comes back (they end up finding her, FYI), we’re launched into full on rom-com territory. I just didn’t buy it. I wanted less emphasis on the hunt for Shara and more emphasis on Chloe’s relationship with her. This does not make the book bad, of course, just that I wanted something different from it.

Lastly, the characters themselves. Chloe is the fun, bisexual, straight-A student you might see in any teen movie nowadays. She has two moms and a bevy of queer friends and none of this is particularly central to the plot. The characters are who they are and I appreciated that a lot. I liked Smith more than any other character in this book, though. He’s sweet and multifaceted, while Rory is the weakest of the trio. He’s fine. Finally, there’s Shara. I found her interesting in the sense that she’s incredibly unlikable. I never rooted for her or understood her problems. She’s more of a plot device than anything else. Even so, it was fun to see how manipulative and calculating she was. Even if this means she hurt poor Smith’s feelings.

I Kissed Shara Wheeler can be checked out at the Argenta Library today!