When I first heard about Jade Fire Gold by June CL Tan, I knew I wanted to read it. This Chinese-inspired fantasy story has all the hallmarks of the genre: A lost prince, a peasant girl who’s actually a noble, The Chosen One(TM), and magic as persecution. The end result is a fairly basic fantasy novel that I unfortunately wasn’t all that impressed by. jade Fire Gold is told in two points of view: There’s Ahn, a peasant girl with secret and incredible power, and Altan, the lost prince of the Shi empire who wants nothing more than revenge for his slain family. Together, the two team up against scheming politicians, a brewing war, and their own feelings to save the Shi empire from itself.

The beginning of Jade Fire Gold wasn’t bad. It set up an interesting xianxia fantasy world, complete with cultivation and evil priests. If you’re like, hey, what’s xianxia? What’s cultivation? In Chinese fiction, xianxia is a genre that focuses around controlling one’s qi (pronounced chee) to attain eternal life, supernatural powers (aka magic), and more. Xianxia is based off Chinese mythology and folklore and is rich with potential. Unfortunately, I think Jade Fire Gold missed the mark. It’s just too…bland to really capture the exciting essence of xianxia. Popular Chinese dramas such as The Untamed (which you can and should watch on Netflix) uti 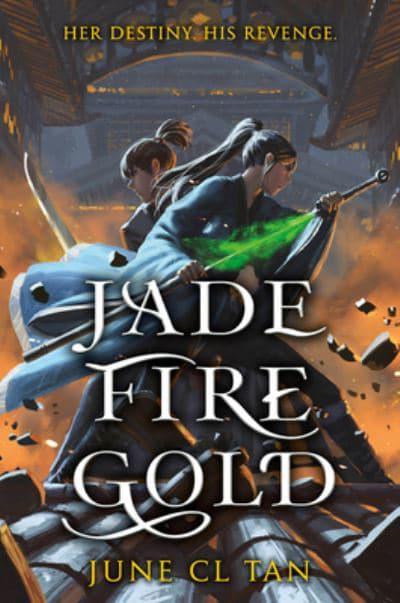 lize the trappings of the xianxia genre in new and exciting ways, whereas Jade Fire Gold doesn’t…really do that. Ahn and Altan fall into typical tropes of the Chosen One and the Lost Prince and I didn’t really feel connected to tehm like I wanted to. All these unfortunate things happened to them and I think the book wanted me to care, but I didn’t. We as the audience don’t get enough time with certain characters to care about what happens to them–and in turn how these events affect our main characters.

This is precisely my biggest problem with Jade Fire Gold. I just didn’t care enough about anything that was going on, save for the few chapters we got of Ahn in the Imperial Palace. That kind of politicking was fun to read about and I wanted more of it. As for Altan, he makes a deal with a legendary Soul Beast at the beginning of the book for enough power to avenge his family. And then….it’s hardly ever mentioned again. Ahn is not very good with her magic for much of the book, and there isn’t even a fun training montage of her trying to perfect it. There’s one scene and that’s it.

The pacing of Jade Fire Gold also felt off. The beginning was well-paced and hit all the right beats, but then the story goes from a palace intrigue sort of book to a road trip/quest book. I’m not typically a fan o such books so I’m not surprised I didn’t like it here. Your mileage may vary, however!

Overall, Jade Fire Gold was…fine. I didn’t love it near as much as I wanted, but if you don’t read a lot of fantasy and enjoy Chinese mythology, then Jade Fire Gold might just be fore you! Check it out at the Argenta Library today!