As most goth children growing up in the 90s and early 2000s, I loved Tim Burton’s The Nightmare Before Christmas. It was one of my favorite movies growing up and I can safely say I’ve seen it at least 15 times at this point. So when I saw one of my favorite YA authors had a book coming out called Long Live the Pumpkin Queen, a sequel to the movie told from Sally’s point of view, I knew I had to read it. 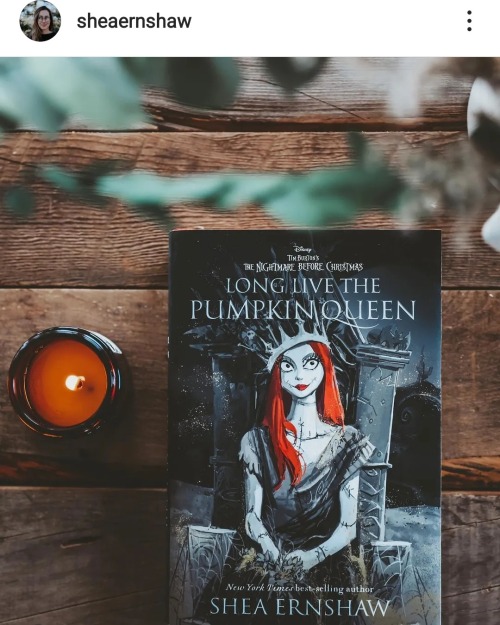 Long Live the Pumpkin Queen is set directly after the movie ends. Sally and Jack are married and Sally is now Halloween Town’s Pumpkin Queen. While the two of them take a honeymoon to Valentine’s Town, not everything is bliss with their marriage. Sally is feeling a lot of pressure being Halloween Town’s queen and feels completely unprepared to do the job well. One day, when she flees to the grove of trees leading to the other Holiday Worlds, she finds a mysterious moon-shaped door that leads to another, more ancient world: Dream Town. After accidentally leaving the door to Dream Town open, Sally discovers that everyone in Halloween Town is asleep, including her husband, Jack. This is thanks to a creature called The Sandman. But the Sandman hasn’t just put Halloween Town to sleep. He’s put everyone across the Holiday Towns asleep.

Determined to save her husband and her friends, Sally traverses the Holiday Worlds in search of a way to stop The Sandman before it’s too late.

I’ll say upfront: I loved this book as much as I thought I would. I’ve read almost everything Shea Ernshaw has written up to this point and I adore her writing. She writes such lush prose, and her books all have a creepy yet folksy aesthetic to them that I love. She was the perfect choice to write a book about Sally and I’m so happy to see the character done justice. The plot is very whimsical and thus very suited to the Nightmare Before Christmas universe. I loved reading about all the different Holiday Worlds. They’re all so richly described that I could easily picture them.

Ernshaw nailed the characters as well. Sally–who is my favorite character in the original movie along with Jack–is a wonderful protagonist. Smart and kind while also having enough flaws to make her relatable. I loved Jack’s appearances, however limited they were. All the side characters in Halloween Town seen in the movie are present as well, including the Vampire Brothers and the Mayor/ (Side note: The Mayor saying “Jack, I’m only an elected official here, I can’t make decisions by myself!” is one of my favorite quotes from the movie).

Sally also gets some well-deserved backstory here, and I enjoyed reading about her origins. I only wish there’d been more Jack in here, but then it wouldn’t be as much about Sally, would it?

Nevertheless, Long Live the Pumpkin Queen is the perfect book to kick off Halloween season. You can pick it up at the Oreana Library today!