Like any good former Twilight fan, I knew I had to pick up Mars Red once I found out it had vampires in it. That’s a foolproof way to get me to read anything. Stick a vampire in it. Anyway, Mars Red 1 by Bun-O Fujisawa is set in Taisho-Era Japan (roughly the 1920s). following a group of soldiers in the Japanese military who go by the collective name, Code Zero. The members of Code Zero just so happen to be vampires and are 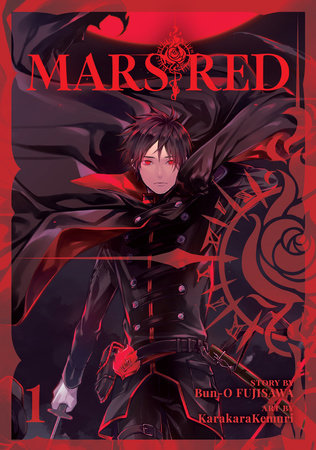 touted as the country’s answer to Western expansion. However, when a young man named Shutaro supposedly “dies” in battle. his childhood friend and rookie reporter Aoi makes it her mission to find him. What she doesn’t realize is that Shutaro is a vampire now–and the most powerful person in Code Zero.

One interesting factoid about Mars Red is that it is not an original manga series. The series started off as a musical production in Japan before being adapted into an anime, then a manga. The manga’s roots on stage are fairly obvious throughout the book. There are a lot of references to various plays (like Romeo and Juliet) and there’s also a lot of dialogue, which would be well-suited for a stage play. I love the design of this book, Taisho-Era Japan being a rarer setting you don’t often see in manga. I also love the character designs–especially the uniform the Code Zero Soldiers wear–and the art in general is very beautiful. The design of the vampires themselves are also very cool. They’re actually quite monstrous instead of being just humans with fangs.

Another interesting factoid about this series is that the vampires seem to be tools for imperial Japan’s rising nationalism. The Taisho Era was a period of unprecedented openness for the otherwise reclusive Japan. And, according to CBR.com (https://www.cbr.com/mars-red-plot-history-anime-vampire-soldiers/), the earthquake at the beginning of Mars Red 1 is a precursor to the Kanto Massacre, which saw Japan murdering thousands of Korean people who called the Kanto region home. It’s a smart nod to Japan’s bloody and imperialist past, a nod that other manga series often avoid.

Plot-wise, there isn’t much to say since this is the first volume of an intended series. We get a lot of setup with what’s going on with Japan, socially and politically, as well as some mythos around the vampires. It’s nothing too new in terms of vampire lore, but I’m not picky about my vampires so I didn’t care/ Overall, Mars Red is a gorgeously rendered manga and I can’t wait to watch the anime to see if it translates to the screen!