Sweet and Bitter Magic is Adrienne Tooley’s debut YA LGBTQIA fantasy novel, and if this book is any indication of what’s to come from Tooley’s career, I can’t wait to see where it goes. At first blush, this book isn’t much more than your standard YA fantasy about witches. Read a little closer and you’ll find a whimsical tale of magic and first love, sprinkled with the sort of classic fantasy tropes you’d see in a fantasy film from the 80s. I don’t know if this is intentional on Tooley’s part, but regardless of intent, I loved Sweet and Bitter Magic.

This novel follows two different teenage girls: Tamsin, the village witch, and Wren, the lonely only child of a sick farmer. Tamsin was exiled from Within–the witchlands–to the village when she was twelve because of a spell gone horribly wrong. As a result of this destructive spell, Tamsin is cursed never to love again. She feels nothing, including kindness. Wren, meanwhile, is full of emotion and anxiety. She’s devoted her life to taking care of her sick father, despite she herself bei 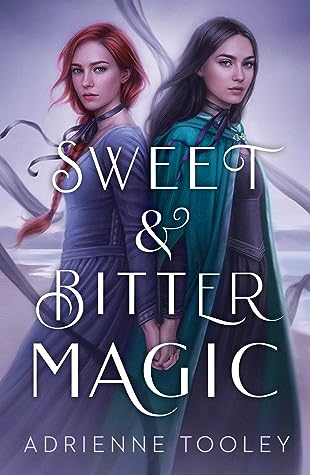 ng what’s called a “source.” Sources amplify a witch’s magic and are welcome to the witchlands. Wren never went, however, and after a mysterious plague tears through the land, Tamsin and Wren head off on a quest to find the dark witch responsible for the plague–with the intent to stop her.

Sweet and Bitter Magic is told in alternating points of view between Tamsin and Wren. It could be argued that Tamsin is the “main” character of this story, but both girls have equal screentime. Their narrative voices are also distinct enough for the reader not to get confused as to whose point of view they’re reading from, which is a relief. Too many authors can’t differentiate voices enough to make multiple POVs work, but thankfully, Tooley can.

The thing I loved most about Sweet and Bitter Magic is its whimsy. There’s just something very cozy about this book. It isn’t too dark or graphic or heavy. It’s just the right amount of these things, sprinkled with a very classic kind of magic system that recalls the fantasy fiction of many years past. That’s not a bad thing at all. Though this novel is a quest book, it doesn’t drag on and on and it isn’t boring. Sweet and Bitter Magic moves along at a steady clip and it’s not a chore to read. The book’s light atmosphere and sense of whimsy reminded me of An Enchantment of Ravens by Margot Rogerson (which we own at the Argenta Library) and I loved every word of it. As mentioned about, Sweet and Bitter Magic is an LGBTQIA fantasy. Tamsin is a lesbian and it’s implied that Wren is bisexual. Their romance has an enemies-to-lovers flare that was very fun to read about.

Overall, Sweet and Bitter Magic is a well-written romp through a magical land, filled with romance and adventure. If this sounds at all appealing to you (it should), check out our copy at the Oreana Library today!