In Case You Missed It – Vampire Academy by Richelle Mead

Well, the time has come, dear readers: I’m finally doing it. I’m reviewing my favorite book of all time. Yes, it has a cheesy name. Yes, it was adapted into an equally cheesy movie. Yes, it’s currently a TV show streaming on Peacock. It’s Vampire Academy by Richelle Mead. Published during the Twilight-era vampire craze in YA (I think 2007?), Vampire Academy is one of those books I distinctly remember reading. I was a freshman in high school when I saw the book at the library for the first time. Being the vampire loving teen that I was, I decided to give it a go. Little did I know, I’d still be talking about this book so many years later and still regard it as my favorite.

Vampire Academy, at first blush, is exactly what it says on the tin. It follows seventeen-year-old Rose Hathaway and her best friend, Lissa Dragomir, as they get up to all sorts of misadventures at St. Vladimir’s Academy, an exclusive boarding school for vampires and their guardians. What sets Vampire Academy apart from so many of its counterparts is its intricate worl 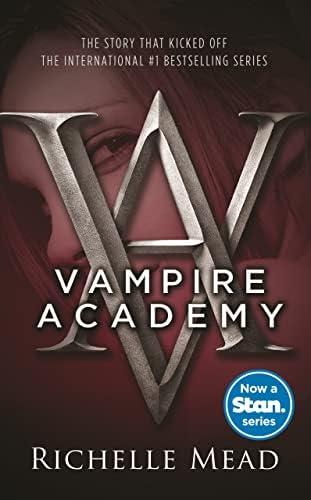 dbuilding. Lissa is a certain kind of vampire called a Moroi. The Moroi are “alive,” for all intents and purposes, and have the ability to wield magic. The Strigoi, another race of vampire, are the “bad guys” of VA’s world. Stigoi are Moroi who “turn” by murdering humans. They’re super fast and strong, but they lack the ability to wield magic like Moroi do. And the guardians? They’re dhampirs. Half-human, half-vampire, dhampirs are assigned to Moroi to protect them from Strigoi. They train at special academies like St. Vladimir’s to learn their trade.

Anyway, as I said earlier, Vampire Academy follows Rose and Lissa, a guardian and a Moroi princess, respectively. After they’re attacked by Strigoi in the human world, Rose and Lissa are forced to go back to St. Vladimir’s where Rose continues her training to be a guardian and Lissa tries to learn the ropes as a Moroi royal after the tragic death of her family.

One of the things I love most about Vampire Academy, and indeed the entire series, are the characters. Rose especially holds a dear place in my heart. She’s such a joy to read–a fun narrator who can party as well as kick butt. She’s very much your typical teenager in some respects, while also taking her job to protect Lissa extremely seriously. There’s also her friendship with Lissa that’s delightful to read about, and another dhampir guardian named Dimitri who remains one of my favorite fictional characters to this day.

Vampire Academy excels in spinning an entertaining story. Rose’s voice is so engaging and Mead’s writing style really lends itself to the fast pace of YA. I’ve read this first book in the series at least four times and it never gets old. Mead is great at adding levity to her books, as they can get quite serious at times, and Rose’s snarky attitude never fails to make me laugh. Perhaps one of the best thing about the series is that it doesn’t feel dated despite being released so long ago.

If you’re looking for a new vampire series to binge, pick up Vampire Academy by Richelle Mead at the Argenta Library!