ANGES AT THE END OF THE WORLD by KELLY MCWILLIAMS

Now that we’ve got that out of the way, let’s discuss the book for this week. Agnes at the End of the World by Kelly McWilliams. The title is pretty straightforward: This is a boo 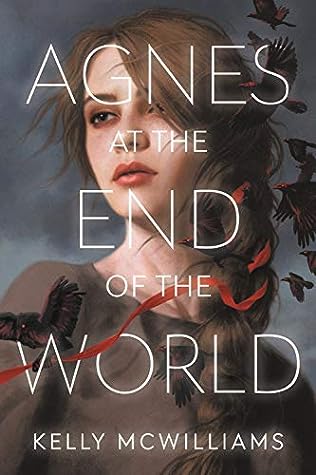 k about a teenage girl named Agnes. And it’s the end of the world. However, the contents of the book are not quite so uncomplicated. Agnes is indeed a teenage girl at the end of the world, but she’s also a member of a fundamentalist cult in Arizona called Red Creek. She and her siblings and her parents have lived in Red Creek all their lives, under the oppressive thumb of their Prophet. In Red Creek, girls and women are forced to wear dresses, get married at a young age to men much older than them, and practice plural marriage. The book is written in two points of view, one from Agnes and the other from Agnes’s younger sister, Beth. The two girls have wildly different personalities–Agnes is pious and pure while Beth is rebellious and loud–but both POVs offer wonderful perspectives regarding life in the cult and how the girls see the world around them.

Agnes and Beth also have a little brother named Ezekiel, who has type-1 diabetes. Agnes smuggles insulin into Red Creek from an “Outsider” woman, a nurse named Matilda. It isn’t until Agnes and Beth overhear that there may be a “plague” invading the outside world that they realize Red Creek isn’t all it seems. The two set off on very different journeys of survival, and I thoroughly enjoyed it.

Agnes at the End of the World reads as a cult book. At first. It isn’t until page 70 or so do you realize that this book isn’t quite as grounded in reality as we thought. It is revealed Agnes hears the voice of God in her head and that she can see and hear things with her supernatural power she calls “the prayer space.” Despite this religiosity, Agnes at the End of the World is not a preachy book. It is not based in any organized religion. Agnes is simply a prophet at the end of the world and she uses her powers to protect the people she loves. Without giving too many spoilers away, Agnes and Ezekiel manage to flee Red Creek as the outsider plague starts spreading in the cult and their journey to a ruined outside begins.

I loved this book. I really did. It’s gorgeously written and has a lot of fascinating things to say about religion, power, gender, and sickness.As I mentioned before, it’s not preachy. It’s almost comforting, despite the chaos that goes on in the book. There’s a plague, people are sick and dying, everything is on fire. It’s chaotic but with Agnes at the center, you just know things are going to turn out okay. Both she and Beth are great characters to read from. Both have distinct voices and both have fascinating stories to tell. The plot is exciting without being too overwhelming. Nor does it drag. It’s pitch perfect, in terms of keeping things moving, and I loved every second of this gorgeous book.

You can pick up our copy of Agnes at the End of the World at the Oreana Library, coming soon!