To celebrate Black History Month and to provide continuing support for Black authors, I’ve decided to read and review Concrete Rose by Angie Thomas this week. Unless you’ve been living under a rock, you probably know who Angie Thomas is. She’s the author of the spectacular novels The Hate U Give and On the Come Up. I’ve read both of those and loved them, but I have to say…Concrete Rose is my new favorite Angie Thomas book. Before I get started with 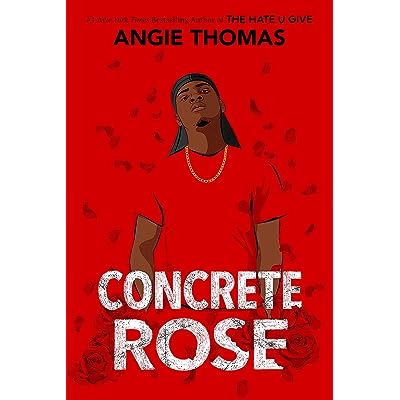 my actual review, however, I’d like to point you to a wonderful new resource for YA novels written by Black authors: Melanin in YA. If you’re in the hunt for your next read, I highly suggest you check their website out!

Now, onto the review.

Concrete Rose is a prequel to Thomas’s first novel, The Hate U Give. It’s set in the same neighborhood as THUG and follows Maverick Carter, Starr Carter’s father in THUG. In CR, Maverick, or Mav as he’s often called in the book, is trying to live his life with the King Lords, his father’s gang, when he finds out he’s a father to a three-month-old baby. Mav’s entire life changes and Concrete Rose is the story of the aftermath.

I mentioned before that CR is probably my new favorite Angie Thomas book, and that’s the truth. I didn’t expect to love it as much as I did, but having just finished the book, I can tell you without a doubt that I adored it. Maverick is a complicated young man trying to do his best, be that in a gang or out of one. When he finds out he has a son, he immediately steps up to be a father. Maverick is kind and loyal while also struggling to find his place in the world. It’s a relatable thing, not knowing where you’re at in life or who you want to be, and Maverick as a character makes that concept shine through all the more.

The supporting cast of characters is great, too. We have Lisa, Mav’s girlfriend, who attends a Catholic school and aspires to be a nurse. We have Mav’s mother, Faye, who is hilarious all on her own–but tough when she needs to me. We’ve got Mr. Wyatt, the grocery store owner who gives Mav his job and teaches him how to grow flowers. There’s such tenderness and love between all these characters, and that sweetness was a real joy to read about.

Mav isn’t perfect and messes up a lot throughout the novel, but that’s what makes him such a good character and Concrete Rose such a good book. It’s a book about love, first and foremost. It’s something we all owe it to ourselves to read.