After a brief hiatus, I’d like to officially proclaim my reviews to be back! We’re starting this new beginning with Void’s Enigmatic Mansion by Kim Hee Eun. This isn’t a text based novel, but a graphic novel, and it isn’t just a graphic novel, but a manhwa. You may be thinking: Wait. Manhwa? Is that the same as manga? The short answer is no. The long answer is…sort of.

Manhwa is the Korean equivalent of the Japanese manga. Manhua, on the other hand, is the Chinese equivalent. Manhwa, manga, and manhua all vary in form and style. Manga, for instance, is in black and white and reads from right to left. Manhwa, like Void’s Enigmatic Mansion, is in full color and reads from left to right like a Western book would. This is because Korean is read from left to right as opposed to Japanese. Manga often exists in print and is wide 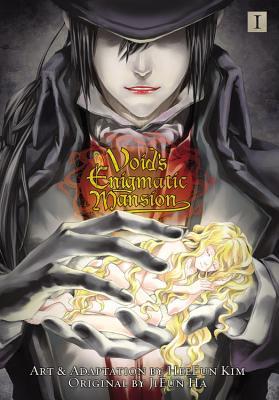 ly translated for Western audiences. Korean manhwa, however, is much harder to come by and rarely goes to print here in the States. Much manhwa exists in the form of webtoons, which are wildly popular. You can even download the Webtoon app to read them!

Void’s Enigmatic Mansion is set in a Victorian fantasy world and centers around a group of people who live in this mansion owned by a man known only as Mr. Void. All of these people are connected somehow by the mysterious Lavelle, a young man who lives in Mr. Void’s mansion. The first volume tells two different stories from the people who live in the mansion. The first story is a creep tale about a taxidermist who becomes obsessed with his creations while the second is about a struggling poet who meets a mysterious woman.

I liked the Gothic creep factor of Void and how it followed a very traditional Gothic literature story structure. Mr. Void is mentioned throughout the book but we don’t really “meet” him, per se. We meet a man who is probably Mr. Void but is never named as such. I liked his character the most. His design is very cool and he almost looks like a vampire. I do wish the stories were given more room to expand and I wish this volume were longer.  I enjoyed what I did read, though, and encourage anyone who loves manga to check this story out, if only to see the differences between manga and manhwa.

You can check out volume 1 of Void’s Enigmatic Mansion at the Argenta library today!